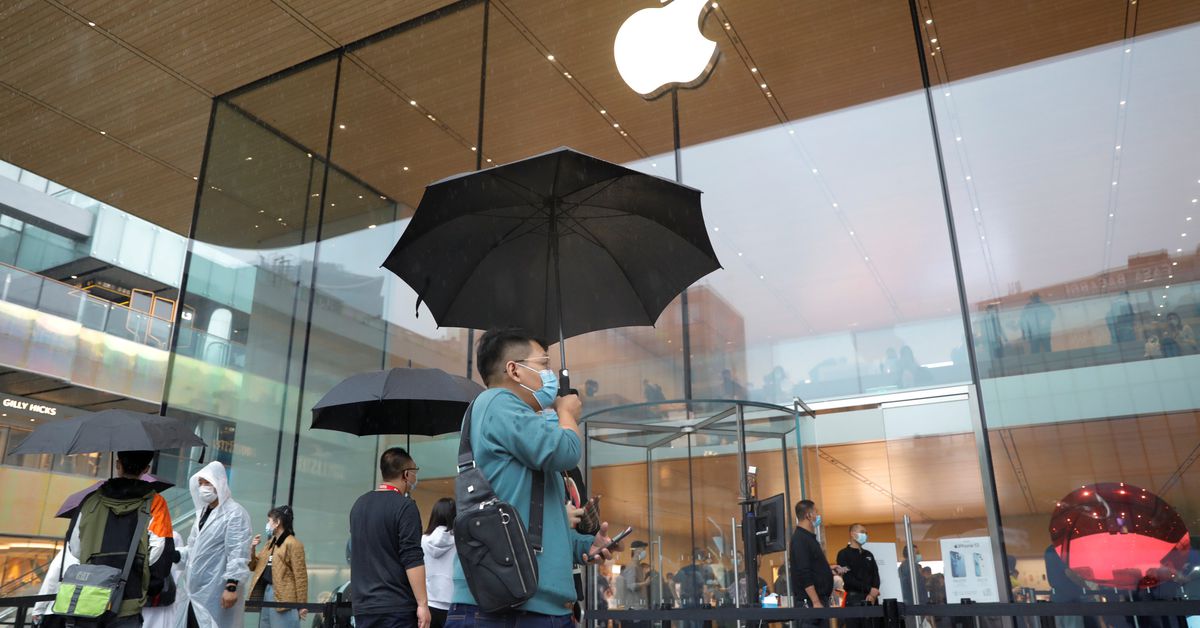 However, two major Taiwanese chipmakers have said their facilities in China are operating normally.

Apple supplier Unmicron Technology Corp (3037.TW) said Sunday evening that three of its Chinese subsidiaries shut down production from September 26 at noon until September 30 at midnight to “comply with the policy of limiting electricity from local governments “.

The Taiwanese circuit board maker said it did not expect a significant impact as more factories complement production.

Eson Precision Ind Co Ltd (5243.TW), a subsidiary of Taiwanese company Hon Hai Precision Industry Co Ltd (Foxconn) (2317.TW), said in a statement that it suspended production from Sunday to Friday at its facilities in the Chinese city of Kunshan.

People wearing face masks are pictured at an Apple store on the day the new Apple iPhone 13 series goes on sale, in Beijing, China on September 24, 2021. REUTERS / Carlos Garcia Rawlins

Concraft Holding Co Ltd (4943.TW), a supplier of speaker components for Apple’s iPhone and which has manufacturing plants in Suzhou City, has announced that it will suspend production for five days until ‘to Thursday noon and would use stocks to meet demand.

Chipmakers United Microelectronics Corp (UMC) (2303.TW) and Taiwan Semiconductor Manufacturing Co Ltd (2330.TW) told Reuters there had been no impact on their factories in China.

â€œUMC’s Hejian plant in Suzhou is currently operating at full capacity of over 80,000 wafers per month,â€ said the Taiwanese company, whose customers include Qualcomm Inc (QCOM.O).

Foxconn had to “adjust” a small part of its capacity there, which includes manufacturing non-Apple laptops, one of the people said, adding that the company had not seen any impact on other big ones. production centers in China.

The second person said the company had to move some teams of workers from Kunshan in late September to early October.

Foxconn, one of Apple’s major suppliers, declined to comment.

Report by Kanishka Singh in Bengaluru and by Ben Blanchard and Yimou Lee in Taipei; Editing by Kim Coghill and Christopher Cushing