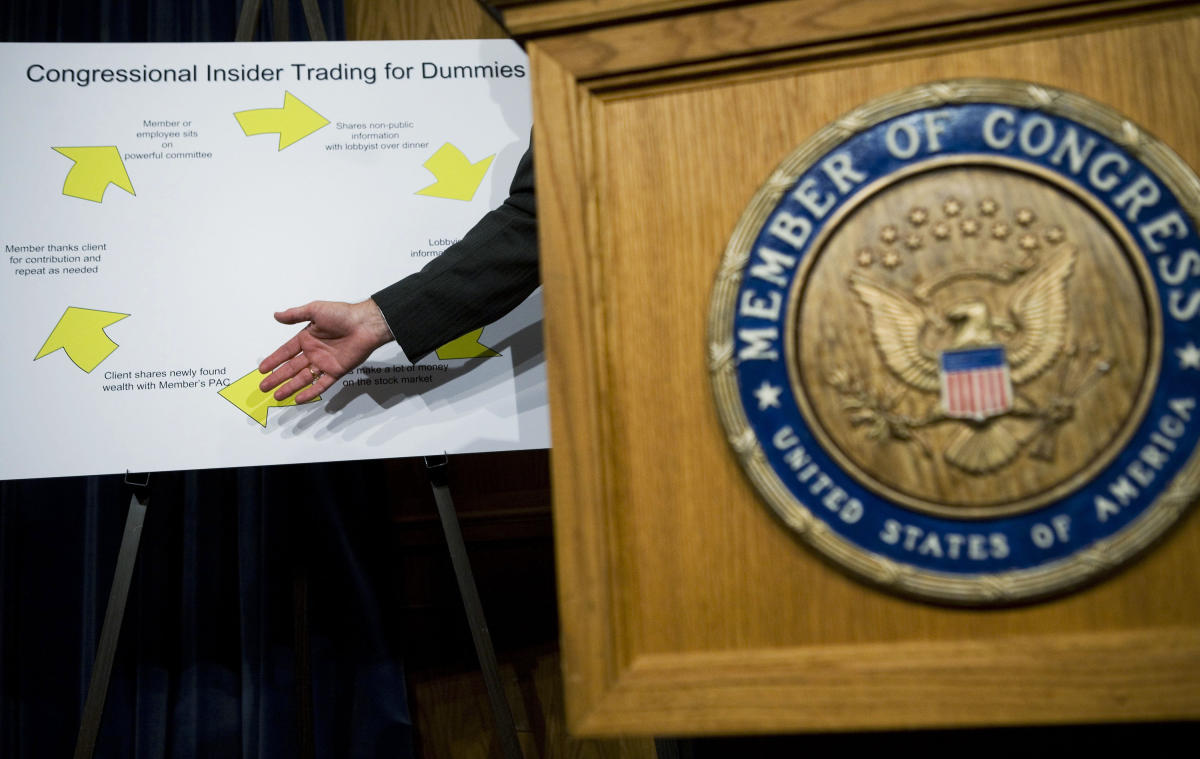 Should members of Congress be allowed to make money by investing? Yes.

Do they have to abide by any special rules to make sure they don’t exploit any inside information they get because of the unique nature of their job? Yes.

Can you do both? Yes!

There is growing momentum to ban members of Congress from buying and selling stocks, following new revelations that some of them routinely violate current insider trading rules, with little or no penalty. The STOCK Act, passed in 2012, prohibits lawmakers from trading on nonpublic information and requires disclosure of stock trades within 45 days. But dozens of members and employees broke disclosure rules, and some may have profited from trading market-moving information they gathered in insider briefings, before they are made public. The standard penalty for violating the STOCK Act is a laughable $200, and Congress sometimes waives that. The policeman seems unable to control himself.

There are at least four bills that would ban congressional stock trading and restore some credibility to the legislature. One of the obstacles to such a ban, until recently, was House Speaker Nancy Pelosi, who said just two months ago that lawmakers should be able to trade stocks because “we’re an economy free market”. But a recent poll found that nearly two-thirds of voters support a ban on stock trading, and Pelosi veered as the issue grew and she found herself on the wrong side of the equation. public opinion. Senate Majority Leader Chuck Schumer also favors a ban, meaning Democrats who control both the House and Senate could enact a ban this year.

Opponents, including the Wall Street Journal’s editorial page, argue that a ban on stock trading would make it harder to recruit qualified candidates for House and Senate seats. The same would apply to staff, if a trade ban were extended to them. If private sector workers are allowed to trade stocks, the reasoning goes, they would have to give up lucrative side business in order to pursue public service.

A reasonable way to combat abuse of privileged information

But prohibiting stock trading is not the same as prohibiting stock market investment. An underrated element of the four bills is that they would still allow members of Congress to trade mutual funds and ETFs, which leaves plenty of opportunities to profit from stock market gains and lose money like all typical investors when the market crashes. Prohibiting trading in specific stocks, while allowing trading in a wide range of funds, is a perfectly reasonable way to curb the abuse of inside information while leaving the profit motive intact. This would prevent members from betting on individual companies that could be affected by new drug approvals, government contracts, investigative revelations or controversial congressional hearings. They could only cheat when confidential information affected an entire industry.

Trading funds is even better than trying to pick stocks, for most ordinary investors. It spreads risk while allowing the holder to bet on specific sectors or themes. Take, for example, Vanguard’s Information Technology ETF (VGT). The fund’s top holdings are Apple, Microsoft, Nvidia, Visa, Mastercard, Adobe, Broadcom, Cisco, Salesforce and Accenture. The Vanguard ETF’s one-year return is 8%, while the two-year return is 51%. Lots of wins. If you had invested only in Apple or Microsoft, you would have outperformed the ETF. But if you had chosen Adobe or Salesforce, you would have underperformed. The most popular ETFs, of course, are those that mimic the S&P 500 Index, allowing the holder to benefit from gains in the overall stock market without having to choose companies, sectors or themes.

ETFs trade like stocks, and investors who want more sophisticated strategies can short them or use options. There are now cryptocurrency ETFs for people who want to bet on bitcoin and the like. Any member of Congress who says this does not represent sufficient participation in the free market economy should log out of r/wallstreetbets and attend more committee hearings.

Trade funds could still give lawmakers the ability to buy or sell based on nonpublic information they gather through classified briefings or other government work. There is evidence, for example, that Republican Senator Richard Burr of North Carolina sold $1.6 million worth of stock in early 2020 based on inside information he had about the likely severity of the pandemic. of coronavirus, which had not yet exploded. If so, Burr would have anticipated a broad decline in all stocks due to the pandemic, which actually happened shortly after he was sold. He may also have shared non-public information with a family member who traded it. The Securities and Exchange Commission is investigating.

There are other complexities of a stock trading ban. Who else should the rules apply to, other than elected members of Congress? Should investments be placed in a blind trust? What should be the penalty for a violation? How transparent should members be about their transactions?

There are also practical answers. If Congress were to ban trading in stocks but allow trading in funds, that would leave a lot of flexibility and upside investing for people who want to take the risk. It should therefore be no problem to extend the ban on trading in shares to spouses, dependent children, staff members and spouses of staff members. There should be exceptions for spouses who are professional investors, like Nancy Pelosi’s husband, Paul Pelosi. All parties would still be prohibited from using inside information to profit from funds.

The transaction reporting deadline should be enforced, for real, and perhaps shortened, with stiffer penalties for violations. Most ordinary consumers don’t get fee waivers if they send in their credit card payment late or underpay their taxes, and members of Congress shouldn’t get waivers either. If Congress wants to exempt itself from reporting violations, then it should pass corresponding legislation waiving all late filing penalties for every consumer in every situation, everywhere in America.

Unlike many show laws that are never meant to pass, each of the four stock ban bills would significantly improve on the current botched rules. Each would prohibit trading in individual stocks but allow trading in funds. Three of the four would allow stock trading in a blind trust, as long as the member had no prior knowledge of specific trades. The bill sponsored by Democratic Senator Elizabeth Warren of Massachusetts would not even allow that. Warren’s bill would establish fines of up to $50,000 for violations. Other bills do not specify penalties.

Three of the four bills have at least some bipartisan support. Three would extend the stock trading ban to spouses, and one would extend it to congressional staffers. The details of all of these bills are similar enough to envision final legislation that could pass the House and Senate, and the timing seems right. With this year’s midterm elections just eight months away, both parties want to show voters they have the public interest in mind. After that, they will probably lose interest.

Rick Newman is a columnist and author of four books, including “Rebounders: how winners go from failure to success.» Follow him on Twitter: @rickjnewman. You can also send confidential advice.

What we know so far